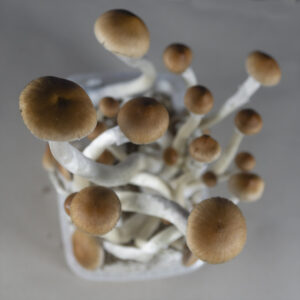 Seen as one of the most popular magic mushroom species on the market due to it’s relatively large availability in comparison to other species and psychedelics. As well as this, being one of the easier to grow mushrooms makes the Cubensis, sometimes called the ‘Mexican mushroom’, widely sought after across the world. As with most Psilocybin mushrooms, the Cubensis contain Psilocybin and lesser amounts of Psilocin.

Named ‘Cubensis’ by its founder, Franklin Sumner Earle in 1906, the name translates to ‘coming from Cuba’. However the history of the Cubensis might go back quite a significant ways earlier as noted botanist and psychonaut, Terence Mckenna, states that there is evidence to prove that humans in ancient Thailand were very much aware of the psychoactive mushrooms and their powers as far back as 13,000 BC, 15,000 thousand years ago, it’s no wonder the Cubensis strain has lasted the test of time.

Coming in a color range from white to ashy red and sporting a golden/yellow center on the top of its cap the Cubensis can grow up to 8cm in diameter, distinguishing it from other species. The Cubensis is native to many tropical and subtropical regions such as Brazil, Mexico and India and its natural habitat is the dung of large herbivores, mostly cows, found in humid grasslands.