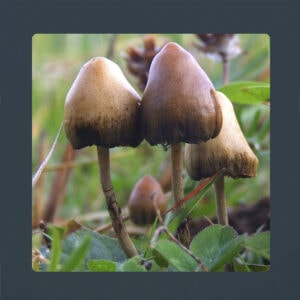 Native to Europe and otherwise known as ‘Liberty Caps’, the Semilanceata doesn’t have quite the same stoic history as some other magic mushroom species. Although it grows mostly in continental or oceanic climates, there is little to no evidence that the mushroom was used throughout the centuries for any mystical or spiritual purposes which is quite the oddity considering how it’s brother and sister species were.

First noted in 1799 in London when a family unknowingly picked and cooked some of the mushrooms, a chemist, August Everard Brande, recorded their reactions, stating that at times they came under spontaneous “attacks of merriment” doesn’t sound too bad does it. It wasn’t named however until 1838 when Swedish mycologist Elias Magnus Fries named it Agaricus Semilanceata, eventually becoming Psilocybe Semilanceata, furthermore it took until the 1970’s for the Liberty Cap to see recreational use, thanks to Albert Hoffman in part.

One of the more unique looking species of magic mushrooms, the Liberty Cap grows upto between 4cm and 10cm with a cap size of 0.5cm to 2.5cm, relatively small when compared to the Cubensis. If fresh, the slimy mushroom can range in color from a deep chestnut brown to a light olive green and fades to a tan or yellow hue when dried. Found across almost all of Europe and now, due to spore migration, it can be found in the forests of the USA and Canada. Unlike the Cubensis, Liberty Caps are not a dung-loving species and instead grow around moist grass, vegetation and damp areas in general.