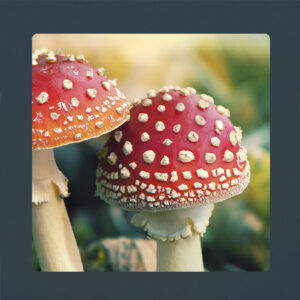 Maybe not known quite as well by its scientific name, the Amanita Muscaria, commonly referred to as ‘fly agaric’ is however, to date, the most popular magic mushroom in existence, probably out-gunning any non-magic variants as well. The image of the bright red toadstool with white warts or shapes on it is one of the most common seen images across europe, from children’s stories to fantasy tales, christmas to science fiction and everything in between, notably the character ‘Toad’ from the Super Mario series is modelled after the fly agaric toadstool. As well as being one of the most beautiful species of mushrooms on this earth, many historians debate the full influence of the fly agaric with many stating that this species of mushroom is in fact the root of many modern-day religions, as it has been having a noted impact for almost 4,000 years now. The fly agaric holds special sway in Siberia, where the shamans of the region have been using them ritualistically for thousands of years. It’s name comes from one of its main historical uses, as as early as 1256 it was being used as an insecticide.

Sitting apart from the Psilocybe and Panaeolus variants, the Muscaria belongs to the Amanita genus under the Amanitaceae family, this family, coincidentally, is the cause of 95% of mushroom related deaths in history. No need to worry though, despite the fly agaric being classified as poisonous, official records of death resulting from its consumption are incredibly rare and it is relatively easy to render the mushroom perfectly safe. The psychoactive compounds in this family of mushrooms are also different to most other species, instead of psilocybin, the active chemicals in the fly agaric are ibotenic acid and muscimol but the effects on the human mind and body are largely the same.

Looking like a white egg when it sprouts from the ground, the Muscaria is covered in small triangular shaped warts ranging from yellow to white, as it matures the Muscaria develops it’s beautifully rich and red shade whilst the warts become less pronounced as the mushroom grows, on the way to maturity the cap will become less egg/glob shaped and flatten out like a plate by the end of its growth cycle. At full maturity, the cap of the Muscaria can grow from between 8cm and 20cm and can reach a height of 20cm as well, making this one of the larger magic mushroom species you can find. Living across the world you can find the fly agaric in almost all parts of the northern hemisphere but it is most common in mainland Europe.